No, Not You, the Other Guy 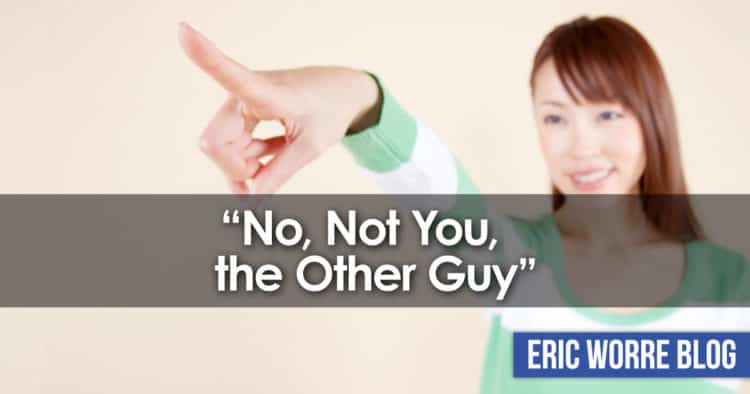 There are several techniques to use when inviting prospects to hear about your opportunity. The trick is figuring out which technique would be the best to use with each prospect.

Some prospects on your list may be people who are higher up the ladder than you or are already successful. This can be people like your boss, a doctor, or a well-respected member of the community. It can be hard to talk with them about your opportunity because they may already be successful or because you are asking them to view you as an authority on the subject.

But despite that, you still think they would be great in Network Marketing, and you need to share this opportunity with them. So, how do you do that?

The best technique to use in that situation is the super-indirect approach.

Get the Scripts, Skill, and Strategies to Confidently Invite 300% More Prospects to Hear About Your Opportunity!

The super-indirect approach is incredibly powerful to use because it works on a number of psychological levels. The way this approach works is that you tell the prospect you aren’t prospecting them, but you wonder if they might know someone who would be interested or benefit from this business. Basically, you say, “No, I’m not talking to you. I want to talk to them.”

Here are some examples…

“The business I’m in clearly isn’t for you, but I wanted to ask, who do you know that is ambitious, money-motivated, and would be excited about the idea of adding more cash flow to their lives?”

“Who do you know that might be looking for a strong business they could run from their home?”

“Who do you know that has hit a wall with their business and might be looking for a way to diversify their income?”

Why This Approach Works This approach is successful for a few reasons. First, it can put your prospect at ease because they don’t feel like they are the ones being targeted. Second, how many of you know children who as soon as they are told they wouldn’t be interested in something is suddenly flooded with curiosity about that something? The same thing happens in adults. When you tell your prospect that this opportunity isn’t for them, something inside of them suddenly wants to know more about it.

And so, they ask you questions about your opportunity. Of course, they do need to know more about the opportunity in order to recommend people to you or share the information with the people they know. But by sharing the information with them, they are also educated and begin to understand your opportunity. If they have an entrepreneurial mind, the wheels in their head will start turning, and they will start contemplating the possibilities.

The super-indirect approach works to make your prospects feel comfortable and already get them started in wondering whether this opportunity is for them. And the bonus is that they may even give you some leads for more prospects.

Whether it is with your hot or cold market, the super-indirect approach is an effective technique to use when inviting your prospects to hear about your opportunity.

Get the Scripts, Skill, and Strategies to Confidently Invite 300% More Prospects to Hear About Your Opportunity!